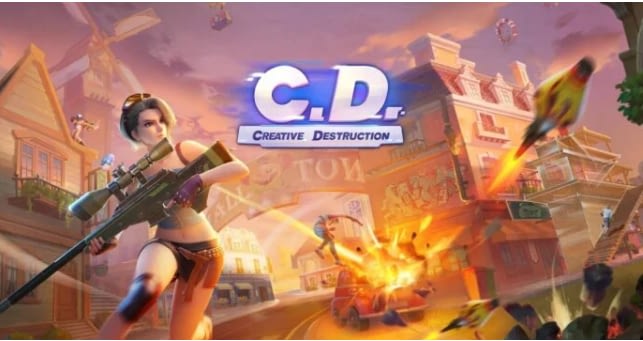 Creative Destruction APK is a Sandbox survival game recently released by NetEase Games. I think this game has the same gameplay and features as Fortnite at 96%. The game quickly attracted a large number of players and received positive feedback. Currently, there is still a game lag or stutter when the new game is released, but the publisher will fix the bug soon. If you’ve played Fortnite for a long time and want a similar gaming experience, this is a great option for you.

The gameplay of Creative Destruction is no different than that of games of the same genre. Players will start the game by parachuting out of an airplane (a spaceship in this game) and then parachuting anywhere on a desert island in the middle of the sea. The map is 4 * 4 square kilometers and is divided into 13 different regions. Below are 99 other players, not just you. They also have one goal: to kill all the other players to become a winner. You have to fight like a lone wolf, find a way to survive and win this game.
This island is not normal. After a certain time, blizzards will appear and narrow the island, bringing the players closer to each other. If you want to survive, you must be in a safe zone. Using the tool is a good idea to get around, but it’s also a double-edged sword because the enemy can know your position. First, try to collect as much gear as you can to prepare to face the enemies. Having a gun is better than nothing. If you kill them, you can steal their gear and items.

Like Fortnite (or Fortcraft), you can build bases to protect yourself or climb to the highest positions on the map that other players cannot reach. However, you cannot be subjective about other players who can destroy your base with weapons. As I can see, the buildings in Creative Destruction are not as diverse as Fortnite, and they are few in number. By collecting wood, stone, and other materials, you can turn them into solid and invincible defense buildings. This is only a temporary solution. There is no safe place on this island, the only thing that will help you survive is your survival instinct, your wise maneuvers and your skillful use of weapons. You also need a little more luck.

Creative Destruction weapon system is divided into many types such as assault rifles, pistols, shotguns, submachine guns, sniper rifles, launchers, melee weapons. You can use familiar military weapons like the M416, AK47, AWN, UMP9, or even powerful shotguns like the S1897. Do not forget to collect the accessories of the gun to make it stronger. Also, the silencer will help your weapon not make any sound when shooting at enemies. Equipment such as armor, helmet or first aid kit are also important in this game that protects your life.
You can use the game money to buy clothes and hairstyles for the character. Although the battle is fierce, you should still look great.

If PUBG Mobile focuses on realistic graphics and chooses dark colors to represent desolate battlefields, this game features animated graphics in a colorful and relaxed style. You will think of Fortnite while playing Creative Destruction. When you die, the character will be dragged into the sky by two balloons and then he will greet in a very funny way. Perhaps due to its simpler graphics, the game runs more smoothly on a variety of devices, allowing gamers with a low-end phone to experience the game.