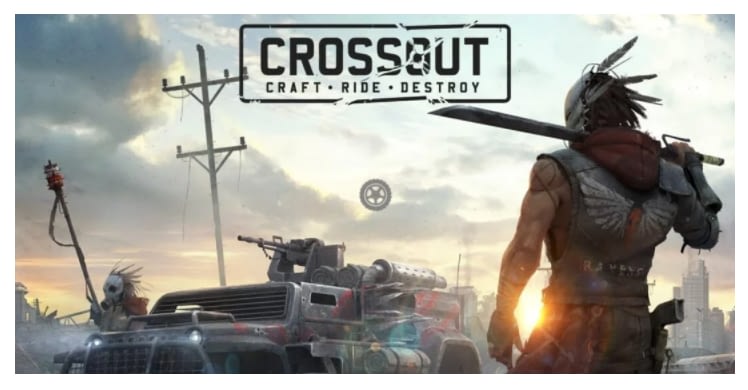 Crossout Mobile APK 0.8.4.36393 – Do you like racing games? In Crossout Mobile (Rename from Mad Driver), the winner is not the first, but the one who beat other players.

The gameplay is quite similar to first person shooter games, but what you control is not a warrior or soldier, but a vehicle war machine with heavy weapons. If you love cars but are starting to get bored with traditional racing games like Asphalt 9 or GRID Autosport, this game is the perfect choice for you.

How to play
Driving in Crossout Mobile is very similar to PUBG Mobile, on the left side of your screen there is a virtual switch for controlling the car and a virtual switch for shooting, and on the right side of the screen there is a virtual key to help you adjust the camera. For those who love racing games on mobile, controlling this game will be a bit difficult at first but after a few games you will master it.

Crossout Mobile’s main mode is 4vs4 battles. To start a game, you will be associated with any player in the system. Your mission is to kill all enemies to win. Focus your firepower, move wisely, and turn your opponent’s vehicles into a pile of debris. Join the game and climb the world rankings by defeating players from all over the world.

The great thing is that by focusing the fire on the parts of your vehicle, you can destroy your opponent’s vehicles. For example, if you shoot an enemy’s weapon, it will be damaged and stay outside of the car, and the enemy’s car cannot attack it. If you shoot at all four wheels of your opponent, their vehicles will not move and you can attack freely. But be careful because the enemy can do the same to you. Cooperate with your teammates and create great tactics in this game.

Unique cars
Not just modern luxury cars like Ferrari or BMW, but cars in Crossout Mobile look pretty old and it’s as if the cars were recycled from junkyards. However, this is what makes this game special. The game allows you to use the materials you collect to make your own car. You can build millions of cars from hundreds of different parts that don’t fit any vehicle. An armored car, a fast car, or a car equipped with a bazooka, which one do you like best?

After each game, the game will give you a mystery chest to unlock the device or its parts. Upgrade your equipment to make your car stronger, faster, and more resistant to enemy attacks. There are many weapons to choose from for your car, such as minigun, missile, bazooka …

Graphics
Crossout Mobile’s graphics surprised me. The graphics of the game are not inferior to other games on the market, but can be compared to leading games like PUBG Mobile. Editor Gaijin Distribution deserves praise for its impressive image quality, sharp resolution and realistic in-game environment. You should see a wrecked car, the visuals help it look more like real life.