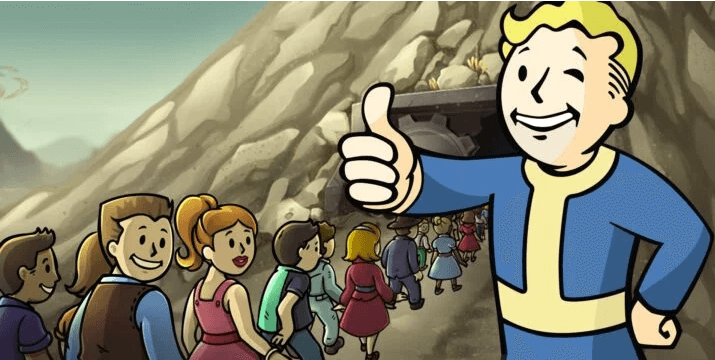 Fallout Shelter is a free simulation game for Android, iOS, Windows and Xbox One devices. The game was released by Bethesda Game Studios in 2015 with the help of Behavior Interactive in its development. The appeal of the game comes from the action game Fallout in the context of the apocalyptic world where people find ways to survive after the nuclear bomb disaster.

Since its release, the game has quickly gained popularity among gamers and critics. It is not surprising that the game received many major awards such as Google Play’s Best Mobile Game of 2015, 2016 DICE Awards and 2015 Golden Joystick Award Winner for Best Mobile / Handheld Game.

If your mission in RollerCoaster Tycoon Touch is to build an amusement park, your mission in Fallout Shelter is much more important. In the apocalyptic world, your task is to build a shelter (called the Vault) for everyone to avoid the nuclear bomb. Now joy is no longer important, all that remains is life or death.

After building a vault, people will gradually move to its base. You are now a boss, you are a manager. It should guide and guide its inhabitants in building and expanding the shelter as they seek food, water and electricity to sustain life. Radiation makes mice, cockroaches and insects huge. They will attack your base every day, so you have to craft weapons to protect your base.

There are rooms that you can expand, so be a smart designer instead of building stupid rooms. When your population starts to become overcrowded, problems start to arise if you build your base unreasonably. Remember, larger rooms are easier to connect to other rooms than smaller ones. However, creating them takes time and consumes more resources.

In addition, the building of power plants and reactors is also important for keeping your core energy efficient. In fact, we cannot live underground without enough light and some kind of machine. Rooms away from power plants require more energy, so you need to install power plants evenly to save the energy you have.

Fallout Shelter residents have stats in the form of S.P.E.C.I.A.L which correspond to Strength, Perception, Endurance, Charisma, Intelligence, Agility, and Luck. If you organize the inhabitants of the room according to their abilities, they will perform the task effectively. For example, power increases generating capabilities in power plants, while charisma is people who attract others through radio,

Not only does it attract residents from abroad, but residents can also marry and be born in their own premises, which helps to increase the number of residents. In addition to storing adequate food and water, you need to increase the happiness of your residents by giving them the right job they want or by organizing weddings for couples. Pregnant mothers have a 100% happiness rate. Don’t forget to update your facilities as the population grows.

There are two types of labs in Fallout Shelter to choose from: Stimpacks and Radaway. Laboratories are responsible for producing medicines and items useful for the lives of residents. When your base is attacked by giant cockroaches, Stimpacks will help you heal and detoxify your Radaway residents. This role is quite expensive, but better than losing your resident forever.

Explore the outside world

In a chaotic world, despite the danger, the outside world has many important elements and materials to improve your foundation. Take one out, equip them with enough armor, weapons, Stimpacks and Radaways, and then they’ll bring you lots of valuable stuff.

Rush is a feature that helps you speed up and complete your transactions immediately, instead of waiting. However, this feature is quite risky. If you succeed, everything is fine and nobody gets hurt. But if you fail, the room in which Rush will light up will destroy many things and attract mice and cockroaches to attack.