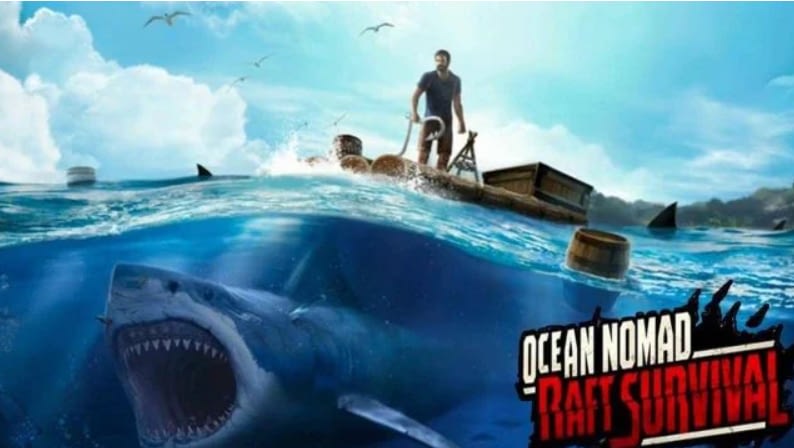 Raft Survival: Ocean Nomad is a survival simulation game from the publisher TREASTONE. In the game, you are alone on a “deserted island” and have to do all kinds of things to survive every day.

The scene was briefly reviewed: an accident, the plane crashed, you are the only survivor. You wake up confused and find yourself lying on the “island”. No, more precisely, a wooden raft surrounded by fragile and dangerous things awaits in the sea.
What do you have to face in the middle of the ocean? Of course, you need to find a way to survive, fight hunger, thirst, sharks … With every need that arises, you will find that you can buy many items, objects, even weapons, floating somewhere in the water. All you have is, by default, just a hook. Use the hook, aim, release, cast the hook as far as possible and pull it. It can be said that this is the main action throughout the game. In response, tap the screen to select the point where the hook should be placed, and then press the release button.

But this is only the tip of the iceberg. Because among the floating elements there are only a few that are necessary for you. For the most part, these things are garbage. In my experience, you need to collect all possible items, put the items that you think might be useful in the future, in the Inventory. Because you have to survive, everything is necessary.

Don’t waste anything you have in your hands

Pay special attention to pieces of wood, ropes and small tools such as hammer, pliers, scissors…. Do not throw them away. These will help you widen your raft and increase your chances of finding your way to the nearest island. Items like wine boxes and barrels will bring you food and water. The weapons will help increase your survivability in the days floating in the sea. You can use the weapons to defend yourself or kill some fish to eat.
Once you have enough resources, you can expand your raft, build a house on the raft, craft weapons, eat and drink, and increase your health stats …

Terrible enemies around the raft

And surviving on a floating raft isn’t just about moving around and finding a way for yourself. You will also have to fight against dozens of different terrifying enemies due to lack of resources and weapons.

The first is the ferocious, bloodthirsty sharks that are surrounded. With the weapons gathered so far and the dexterity of the on-screen touch controls, you kill each one to protect yourself and your raft.

The raft is expanding day by day, you have more resources, which means that you can build a solid, modern and bigger house. Do not let yourself be free, always take advantage of it to enrich your inventory, constantly collect resources. Because time is infinite in Raft Survival: Ocean Nomad, but enemies can appear at any time.

In addition to sharks, you must direct your wooden raft to hurricanes, big waves in the sea. With one touch, everything can lose its balance and you can sink into the ocean. With these natural opponents, you only have one strategy to deal with them: keep calm, hold on, and don’t be afraid.

You will get many valuable items when you overcome the above challenges. Some minor challenges, like removing trash from the feet of the raft, rearranging everything on the raft so that it is neat, get confused with the main task …
A bigger story awaits you to discover
The adventure is not only on the wooden raft with fierce sharks and storms. Finally, you will row on a small island. Many islands will appear one after another without one. You will discover many mysteries in the vast world. Along with your inventory and weapons, you will have to fight an unexpected series of enemies such as poisonous spiders, giant crabs, wild forests … and strange humans.

A great new story is really connected and it is slowly opening up. You are in a different world. A terrible disaster came and swallowed the land in the ocean. The survivors are also buried on small islands. You will join them to discover all the mysteries behind them, join them and survive together in this cruel world.

In fact, this plot is a bit bigger for me than it is for mobile games. But this is also a very good suggestion if the developer has the ambition to expand the game with Chapter 2. It is expected that it will be about his journey to find his hometown and the survivors of this world.

However, in the framework of Raft Survival: Ocean Nomad, I realized that this is a game with a fairly simple gameplay, only a couple of times you will get used to the manipulation and instructions in the game of “flirting”. Then things worked out pretty well, and it’s no wonder. The music is engaging, dramatic, lively, flexible, and creative.