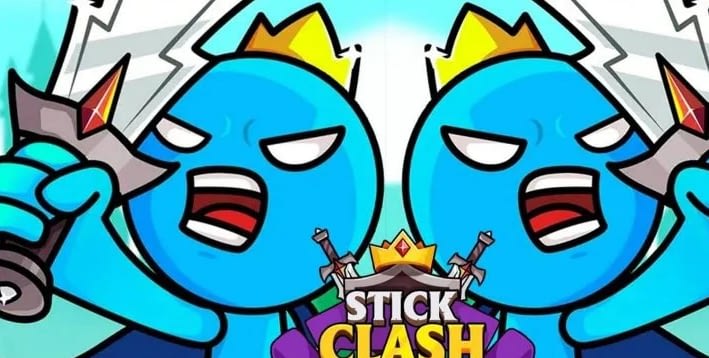 Mathematics and war, the two things seem to have nothing to do with each other. Maybe it has a few things related to it, but in the strategy games I’ve played, no game has mentioned this. This year, developer Azura Global has cleverly combined these two elements to create a unique strategy game. The game is called Stick Clash. What helped this game attract such a large number of players? As for the game, Stick Clash is not a normal strategy game. The rule is very simple. The strongest is the victor. So how do you know who is stronger? Without depending on equipment, weapons or special abilities, each warrior (yours and the enemy) shows his strength in a number above. The unit with the largest number will defeat the other unit, then the strength is added to the strength of the person they just defeated.

For example, you have 30 strength, after defeating the unit with 20 strength, you have 50 strength. These rules affect your decision. You will choose paths with weaker opponents, gradually increasing strength with the aim of defeating the final boss or saving the princess. Remember, you cannot get back on the same path if you keep going. Always be careful with every decision you make.

Calculate to find the optimal route

“Calculate” here is not a tactical calculation, find the right units to join the battle. You will literally “calculate”, you will use addition, subtraction, multiplication and division to analyze the numbers, thus choosing the correct path to complete the level. Just go in the wrong order and you may suffer bitter failure.

After passing level 7, you will encounter some obstacles. When crossing the road with obstacles, you don’t have to fight against anyone, but you still lose some strength. In addition, you can also collect some items that will help you increase strength x2, x3. But you also need to calculate before you pick up these items. Look at the map again, see which path a weak opponent has and a path back to the element path, you will get a score much higher than the original number.

when to use clue?

If you feel stuck in a level and have no idea how to complete it, you can use hints to see the order of the paths you will go on, helping you in turn defeat each enemy to the final boss. However, the hint is not free. You need to see ads or pay with gems. You also have another option to pass the level, which is to skip that level. But I don’t recommend using this feature because it makes this game no longer interesting for you.

Also, you can use gold coins and gems to unlock some cool outfits for stickman units. Stick Clash brings you many interesting outfits, from Roman warrior, tribal chief, Greek warrior… APKMODY MOD APK version has unlocked all the costumes in the store, it allows you to wear any outfit you want.

After each battle, you can collect resources and loot to build your own tower. This feature is still in development, we could explore it in a couple of updates to come.

Like most stickman games, Stick Clash uses simple and classic 2D graphics to simulate battles in a fun way. This graphic style also helps the game reduce violence, although the game still has some gory scenes.