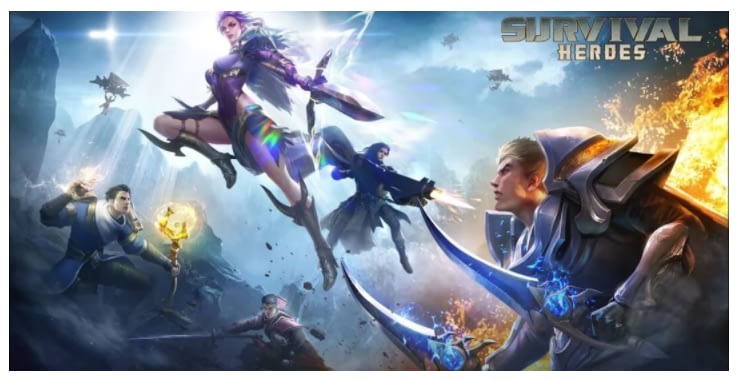 Survival Heroes is the perfect combination of two popular game genres, MOBA and Survival, to create a gaming experience like no other. The game is regularly updated to fix some bugs, improvements, and some new features to make the game more perfect and attract more players.

War of survival
As with some survival games, when you play Survival Heroes, you will start with a character in the sky and choose where to jump. Choosing the first place to parachute is important, if you choose a good position to skydive you will get a small advantage in the first game. Then trust your survival instinct, you’ll have to find weapons, items that will help you survive and be willing to fight against 99 other players online.

Survival Heroes is very similar to the MOBA game with a variety of abilities such as slow damage, stun, invisible, trapped, and wide area. However, in this game all characters have quite a lot of damage and can destroy other players but cannot be split into positions: attack, defense, jungle, support like traditional MOBA game.

The map is not limited to three lanes like League of Legends or Dota 2, the map in Survival Heroes is designed to be much larger with dangers you can’t see in the fog, so you have to keep an eye on the smaller maps. corner of the screen for overall appearance and rational operation. When the dragon appears will also appear in the game so you can choose when you will participate in the destruction of the dragons to take advantage of you and your team.

Over time, the safe zone is getting smaller and smaller. This causes the player to be forced to move to the center area if they do not want to lose their life outside the safe zone, and also makes the game run faster as the players are constantly facing each other.

Weapon system
The weapon system is quite diverse, including up to 30 weapons designed in the style of MOBA games such as bows, swords, pistols. Also, this game allows players to customize weapons and abilities. Weapons can also be upgraded to increase power. In addition to finding and collecting equipment, you must destroy monsters to earn more gold and experience points. In addition to these, the most important thing you can do to survive is the ability to act correctly,

join the battle at the right time, and use skill correctly to optimize the strength of the character to kill the remaining players.

Good graphics
Survival Heroes is designed with 3D graphics optimized to fit mobile phones, but it is not suitable for the Snail Game editor to ignore this factor. Large map design, many landscapes with character abilities look pretty good. The sound system is also very impressive, interacting well with every situation in the game. It cannot be compared to the best survival game like PUBG Mobile, but I think the graphics in this game can satisfy you.